California is moving ahead of the pack with energy-efficiency standards and goals to reduce the effects of global warming at the state level. The West Coast state has a history of being a leader in terms of progressive policies; these policies tend to disperse throughout the country, even if it takes decades. As California commits to making changes with legal backing, schools will have to move toward a carbon-free future. However, the new legislation does not specify how to achieve these goals, so broad discretion exists in how people, businesses and schools meet requirements. Superintendents need to know what this means for the future of energy management and how districts can plan for it.

In 2018, then-Gov. Jerry Brown signed Senate Bill 100, which sets forth a plan to eliminate fossil fuels from its energy use by 2045. Although this new timeline is still 20+ years away, now is the time to undertake initiatives to move away from fossil fuel reliance. Furthermore, SB 100 mandates the state to remove as much carbon dioxide from the air as it produces — resulting in carbon-free operations. The legislation effectively puts school districts on notice to prepare for coming changes, which will require retuning current energy use behaviors and rigorous energy management practices. 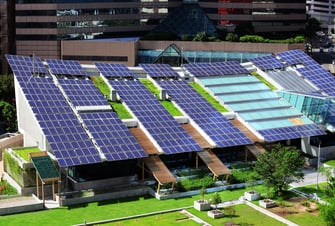 The idea of achieving carbon-free schools across the state is ambitious, but the shortened timeline presents a new problem. How can schools achieve a carbon-free future without risking significant budget deficits? At the same time, achieving net-zero energy use means installing systems and equipment to generate the amount of energy necessary to power the district's energy needs. In other words, solar panels, wind energy and other forms of renewable energy will be essential to meet the current timeline. In order to fund these renewable projects, reducing budget deficits becomes the key to unlocking carbon-free schools.

How Districts Can Adapt

Many schools in California have already implemented some energy-efficiency programs and steps. Making simple changes and completing upgrades in the district, such as resealing windows and replacing malfunctioning, energy-draining HVAC systems, can have immediate energy-saving benefits. However, the most significant energy benefits occur when districts implement operational and behavioral changes. There is only so much a single efficiency improvement for a facility asset can accomplish alone. Smart systems, automation, machine learning, big data analytics, remote control of system settings and sustainable actions by staff and patrons can significantly decrease the energy footprints of California schools.

Know Carbon-Free Reality Is Coming to All States — Eventually

California is leading the nation and working toward a carbon-free future within the next 25 years. Although the state is forward-thinking in this area, states across the U.S. still rely heavily on fossil fuels. However, changes on the federal level and within other states appear likely in the near future, especially with the 2020 election on the horizon. District leaders need to know that carbon-free schools are coming, attainable and cost-effective. This will free enough capital for use in the equipment and asset upgrades necessary to achieve true net-zero status. Help your district prepare for a carbon-free future by visiting Cenergistic online or calling 1-855-798-7779 now.