How a Decade of Ocean Sustainability Can Impact Our Planet

How a Decade of Ocean Sustainability Can Impact Our Planet

Our planet’s oceans are pivotal for life on Earth, whether for those living on the coast or deep within landlocked areas. Ocean currents insulate the planet, storing solar radiation and driving weather patterns. It is estimated anywhere between 50–80 percent of all life on Earth inhabits our oceans. Ocean sustainability plays a vital role in the health of our planet.

The United Nations recognizes the importance of our seas and declares 2021-2030 the Decade of Ocean Science for Sustainable Development. To play a role in this important initiative, we need to understand how human-made issues threaten ocean sustainability and what we can do to help preserve our oceans and their benefits for future generations.

The Biggest Issues Facing Our Oceans

Ocean sustainability is a longstanding issue, yet every year many threats continue or even escalate. With world governments joining forces over the next 10 years to focus on preserving and improving our oceans, the dangers will hopefully become opportunities.

You’ve seen images of turtles and other sea creatures with plastic around the necks and polluted beaches with washed-up garbage stretching across the sands. Every year an estimated 14 billion pounds of trash becomes floating garbage and kills more than a million marine animals and birds.

Most of this trash comes from plastic waste, which releases unnatural toxins into the water and atmosphere, often suffocating wildlife. Ocean currents carry large piles of trash, and at least five massive trash islands have formed at the nexus of major ocean currents — some larger than the state of Texas.

World demand for seafood is projected to skyrocket more than 50 percent over the next 15 years, straining the current fishing industry. Increasing economies of scale require significant additions in seafood harvesting. 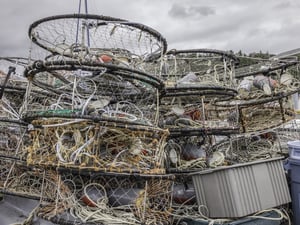 Overfishing, occurring when the number of fish extracted from an ecosystem exceeds the replenishment rate, represents a major threat to the future existence of marine ecosystems.

To meet demand, suppliers are turning to farm-raised aquacultures, which promise more sustainable methods of seafood husbandry. Instead of removing oceanic animals from their natural environments, aquacultures allow cultivators to breed and raise marine animals as they would livestock on a ranch. Experts hope these aquafarms will promote greater ocean sustainability and provide 62 percent of the world's seafood demand by the end of the decade.

While common fish are often at risk of overfishing, they are far from the only victims of the practice. Industrial fishing nets entangle non-targeted wildlife such as sharks, dolphins and turtles. Many of these unintended catches are endangered or vulnerable species, hastening the process of eventual extinction.

New technologies and modified fishing gear have proven effective at reducing what is known as “bycatching” but have yet to scale across the global industry.

Ocean currents transport heat and moisture, playing a significant role in directing the world’s climate and weather. As the planet warms through sunlight trapped by carbon emissions, oceans have absorbed 90 percent of this surplus heat and become warmer, resulting in the polar ice sheets rapidly melting off.

All this excess oceanwater poses a threat to life across Earth. Annually, melting ice caps in Greenland alone dump an estimated 50 cubic miles of freshwater into the oceans, upsetting the density of saltwater ecosystems. Rising sea levels increase coastal flood risk, where an estimated one-third of the planet’s population lives.

Warmer oceanwater causes more frequent and more high-powered storms and reroutes ocean currents, which notably could result in a 1-5 ºC drop in temperature across Europe, enough to catastrophize agriculture, ecosystems and economies.

Extra carbon in the atmosphere also makes its way into the oceans, radically lowering the pH of ecosystems and jeopardizing food chains at all levels. Marine life losing sources of food that cannot survive in acidic oceans will die off, further stressing food insecurity worldwide.

How You Can Help

Our oceans’ health affects every single person on our planet, and it will take all of us globally to make a real difference. Instead of despairing, we offer a few ideas and ways to help get your community involved in protecting our oceans.

Litter and trash pose harm to wildlife, but volunteer groups in every state regularly clean local waterways and beaches. Joining an Adopt a Highway program is a great way to keep trash from blowing into local bodies of water and protect native fauna.

Communities can take a proactive role in safeguarding their waterways and ecosystems, as people in Bali, Indonesia, have done. When the city’s beaches were overrun with mounds of garbage, locals lobbied for a ban on single-use plastics and began a grassroots movement to educate the public on how to reduce waste.

Minimize Your Contribution to the Problem

Reduce what you send to the dump — some of it may end up floating in the Pacific Ocean. Investing in reusable products (e.g., metallic water bottles, zero-waste lunch boxes, utensils and glass containers), composting, and recycling what you do throw away avoids the possibility of contributing to ocean disposal.

Water runoff also poses a risk to local ecosystems and drinking water — picking up bacteria, litter, fertilizer, pesticides and other pollutants on the way to local reservoirs, lakes, streams and rivers. Finding ways to reduce runoff to storm drains, such as washing cars on grass and planting more vegetation across cities, creates healthier communities and protects wildlife. Most rivers eventually connect to our oceans, so cleaning up your neighborhood greatly contributes to ocean sustainability.

Making painless but shrewd changes to energy consumption can make a difference in aggregate. Energy conservation and water conservation provide a way for individuals, homeowners and organizations to significantly lower their carbon footprints.

Limiting energy use limits climate change, so consult the experts with 35 years of experience providing our partners with effective conservation plans. To learn more about how Cenergistic reduces your energy use and creates a long-term culture of sustainability across your organization, contact us for more information at 1-855-798-7779 or visit Cenergistic.com.

How School Districts Can Earn an A+ in Summer School: Invest in Students, Not Energy Costs

Energy Conservation 101: What We Do, How We Do It, and Why it Matters